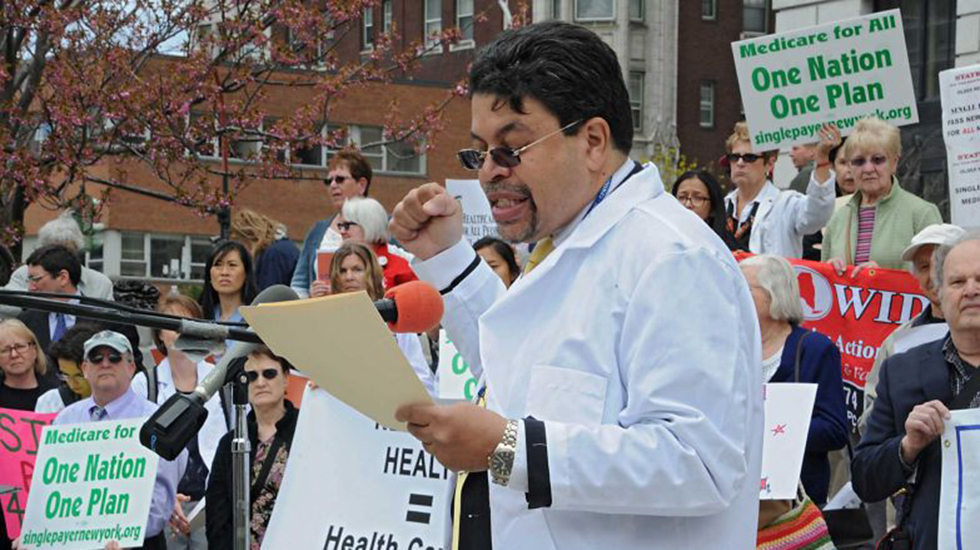 On May 7, 2014, hundreds of doctors, nurses and patients rallied outside the New York State Capitol in Albany and shared stories about their experiences of our health care system in crisis. Advocates then attended more than 80 lobby meetings to push for more cosponsors for the New York Health bill, which if passed, would create a publicly financed, privately delivered health care system in New York State that saves lives and money.

The rally attendees also asked legislators to urge Assembly Speaker Sheldon Silver to allow a vote on the bill. The bill currently has close to majority cosponsorship in the Assembly and the endorsement of a wide coalition of organizations including New York State United Teachers, SEIU 32 BJ, Citizen Action of New York, Public Health Association of New York City, 1199SEIU, the New York State Nurses Association, and the Working Families Party.

At yesterday’s rally, Dr. Danny Lugassy, an ER doctor and a board member of Physicians for a National Health Program-NY Metro, shared the following story: “I saw a woman arrive with chest pain; she had classic symptoms and an EKG pointing to a severe heart attack. As we prepared to rush her to the cardiac cath lab, she suddenly yelled, ‘Stop! I need to call my insurance company right now to see if you’re in my network and how much this will cost me. I can’t afford this right now!’ Often, after a long night at the ER, I go home and look myself in the mirror and think, ‘How many people did I bankrupt today?'”

Click play below to view a short video of Doctors Council Executive Director Dr. Matthews Hurley speaking at the rally.