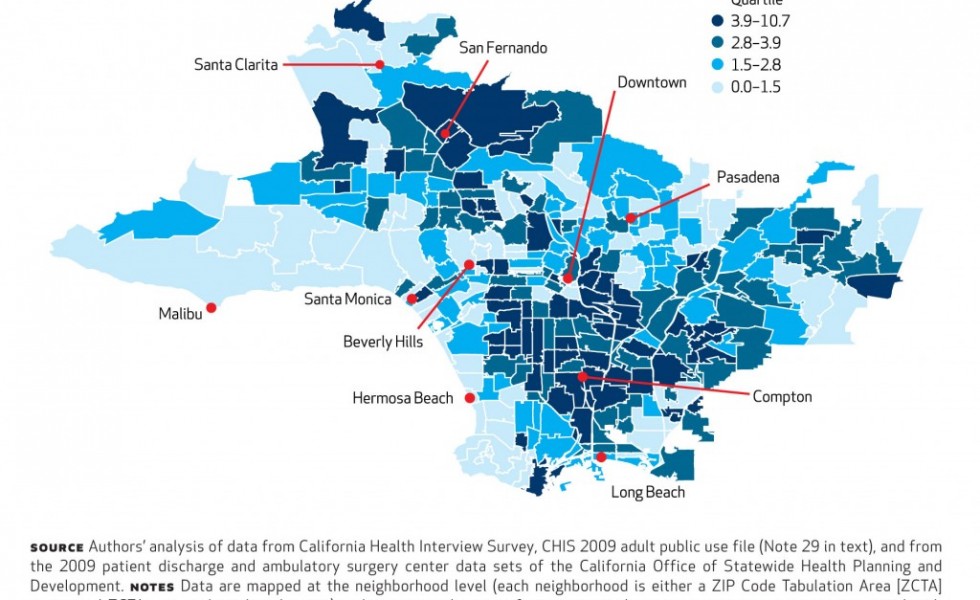 It remains both a shock and disgrace that so many health disparities begin in early childhood.  An August 2014 Issue Brief by the Robert Wood Johnson Foundation: Early Child Hood Experiences Shape Health and Well-Being Throughout Life highlights the impact of early childhood in starting down the road to later illnesses:

“The association between socioeconomic factors and child health is evident from birth.
Factors such as nutrition, housing quality, and safety at home and in the community—all linked with family resources—are strongly associated with child health. Research shows that children’s nutrition varies with parents’ income and education and can have lasting effects on health throughout life; for example, inadequate nutrition is linked with obesity during childhood, which in turn is a strong predictor of adult obesity and its accompanying risks of chronic disease, disability and shortened life. Similarly, children exposed to lead-based paint, most commonly found in lower-income neighborhoods, are more likely to suffer from lead-poisoning, which can lead to irreversible neurological damage.”

The report continues in a more hopeful vain explaining that early interventions are helpful and have been shown to work: “Well-trained and responsive caregivers, small class sizes with high teacher-child ratios, safe and adequate physical environments and age-appropriate activities focused on enhancing the cognitive and socio-emotional development of the child are often cited as hallmarks of high-quality child development and day care centers; parental involvement and/or services for parents also have been considered important.”

What role do doctors have in early intervention?

The therapeutic interventions at the disposal of doctors during the face time we have with our patients (and the sometimes all too short minutes) are of course important, but how can they compete with the social and community determinates of health?

A recent blog post in Health Affairs illustrates another gross disparity in health, this time with adults.  The authors of an August article in Heath Affairs: Geographic Clustering Of Diabetic Lower-Extremity Amputations In Low-Income Regions Of California, highlight their finding  that ” the amputation rate for people in low-income areas is almost double the rate for those in high-income areas” in a powerful comparison between two maps of LA County. 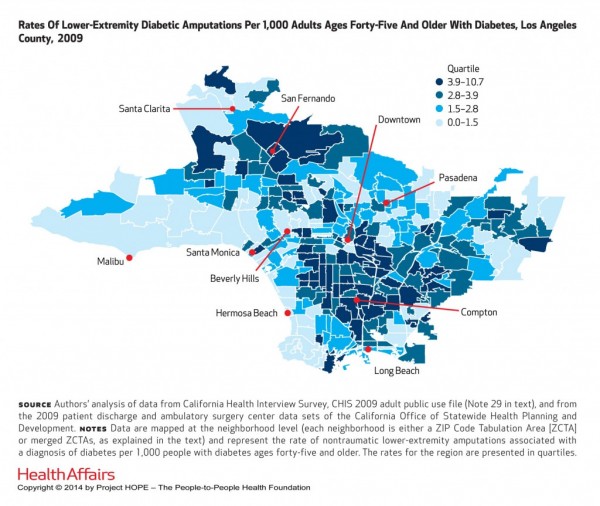 What is a doctor to do?

Increasingly it is clear that many determinates of health are found in the communities and homes of patients; the underlying causes of illnesses are often social and political.

How can the doctor who deals with individual patients also address the problems of population health in a serious way?

Some hospitals are using Community Health Workers to address the needs of patients outside the hospital.  But the issue here is not the individual doctor who is doing the best he/she can, it is the collective responsibility of doctors to organize themselves, their institutions and their communities to create just models of health care.   The end of fee-for-service has its parallel in the end of the mythical hero doctor whose success is simply an act of will.  Rather doctors must pair population health with a concept of professional ethics that understands the shared and collective responsibility to provide just health care to all communities.

What is a doctor to do?

Doctors Council and our members believe that effective patient advocacy starts before our patients are in front of us and continues after we treat them.  For example, in Chicago we worked with community groups to address coal plant emissions.  And in New York, we are part of a coalition seeking legislation to combat asthma in families’ homes.

If, as doctors, we can help our patients stay healthy before they become ill, we are being effective patient advocates.

To address chronic illnesses we cannot just deal with them in the examination room, we have to take on the underlining social and economic determinants of health in all communities.