“No Cuts, No Closures” at Health + Hospitals 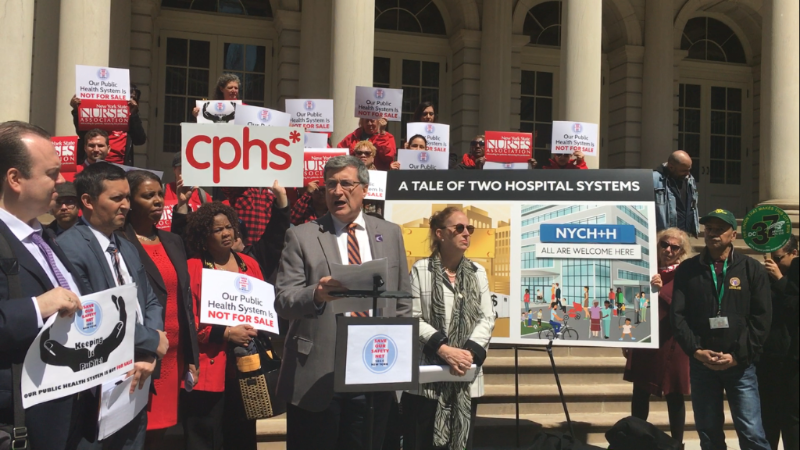 On April 14th, health care workers, representatives from community organizations and elected leaders in the Save Our Safety Net Campaign took to the steps of City Hall to sound the alarm about a forthcoming report which may recommend proposals for job losses, closures, and privatization at New York City Health + Hospitals.

“We do not need an outside consulting firm to issue a report that cuts, closes, consolidates, regionalizes, outsources or privatizes services in our public hospital system,” said Dr. Frank Proscia, President of Doctors Council, who was joined by District Council 37 and New York State Nurses Association leaders as well as Public Advocate Letitia James and Manhattan Borough President Gale Brewer.

Many supporters of the public system worry that the report, from consulting firm Manatt Phelps & Phillips, could provide cover for cuts.

“Privatizing these desperately needed resources will not solve our problems,” Public Advocate Letitia James said. “Privatization has been proven to cost all taxpayers more money.”

Dr. Ram Raju, CEO of Health + Hospitals, has put forward an ambitious plan to increase revenue by improving the patient experience and growing MetroPlus insurance, but Health + Hospitals continues to struggle financially. According to recent reports, it has only 15 days cash on hand and faces a $2 billion deficit in 2019. Whether Dr. Raju’s ideas will be able to close that gap, especially as federal cuts to the Disproportionate Share Hospital (DSH) program bear down on the system, remains to be seen. Signaling concern over a lack of a “Plan B” for reducing the city’s financial burden for the public hospital system, Manatt was hired to issue a report examining the economic sustainability of Health + Hospitals.

In drawing attention to the underfunding of H+H, the coalition drew the contrast between the city’s public hospital system and its private hospital affiliates who rely on the city hospitals to train their medical students and residents, as well as providing attending physician services, reimbursed by H+H. Pointing to 2014 data from the New York State Department of Health, the coalition showed that 83% of outpatients seen at Bellevue had either Medicaid or were uninsured, while the figure was just 23% at NYU Langone. Yet NYU Langone still received disproportionately more in charity care funding as a function of the number of uninsured it sees when compared to Bellevue.

The report from Manatt was released on April 26, however, many of the “solutions” offered were strategies H+H is already taking and many others would require state approval. Finer details were not outlined and many questions about how Manatt’s proposals could be implemented remain. Doctors Council and the Save Our Safety Net coalition are pushing legislation in Albany (S.6948, A.9476) that would provide enhanced reimbursement to hospitals where at least half of patients receive Medicaid or are uninsured, and will continue to raise these issues and forcefully fight back against any cuts or closures that could affect the lives of some of New York’s most disadvantaged and forgotten patients. Everyone who is concerned about the future of the public health care system is encouraged to learn more and get involved in this growing campaign.

← An Interview with Dr. Shona Johnson, a junior doctor at Royal Berkshire Hospital in Reading, England
How Healthy is the State of Women in Medicine? →