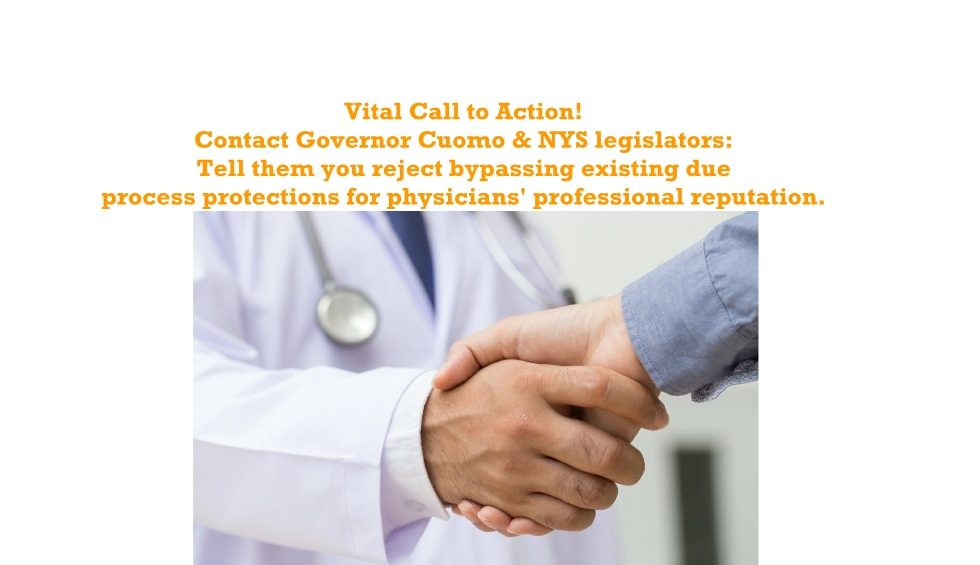 Vital Call to Action!  Please call Governor Cuomo and your NYS legislators & email your NYS legislators to tell them to reject a proposal contained in the Governor’s Budget bypassing existing due process protections for physicians and giving the State enormous new powers to harm a physician’s professional reputation.

We urge the NYS Legislature to reject the Governor’s proposal to bypass existing due process protections for physicians when a complaint is filed with the Office of Professional Misconduct (OPMC), that the NYS DOH would disclose when a physician is under investigation, and enable the OPMC to suspend a physician’s license prior to the completion of disciplinary hearings.

The Governor’s proposal can harm a physician’s professional reputation by bypassing existing essential important due process protections for physicians when a complaint has been filed with the state disciplinary board.

Governor Cuomo has announced more punitive oversight of physicians and other medical professionals through the NYS Department of Health’s Office of Professional Medical Conduct (OPMC).

The Governor’s proposal would make investigations and non-disciplinary actions public.  Under current law the NYS Department of Health is prohibited from confirming the presence or absence of an investigation.  The Governor’s proposal would enable the Commissioner of Health to make this public when he/she deems it’s warranted.  That subjective standard leaves a doctor open to have the public aware of any complaint before any investigation is complete and the doctor has had a chance to defend him/herself or give an explanation.

In addition, certain “expedited processes” already exist in the law, wherein a physician may be issued a warning for a minor and technical violation/ warning which does not rise to the level of prosecutable misconduct, and these are, under current law, non-disciplinary and non-public.  Now these would be made publicly available.

The Governor also proposes to allow the State Health Commissioner to summarily suspend a physician’s license, at the start of an investigation, if the Commissioner deems that physician to be a risk to the public. Current law already requires that the physician be an imminent danger before their license can be suspended.

Most complaints don’t yield actual findings of misconduct.  Doctors have rights with due process that should be protected not eroded.  No one supports a bad doctor but the process must be fair. There are large professional implications when an accusation is made against a doctor.

It is important to note that New York State already has the power to bypass existing due process protections and “summarily suspend” a physician from practicing in certain instances where it would be clearly imprudent to wait for final disciplinary action by OPMC.  It also has the power to disclose information to the public about a physician under investigation when the OPMC has determined that the case has enough merit to formally bring charges.  It has not been demonstrated why these existing laws are inadequate to protect the public.

A simple internet search would show an unproven allegation that could stay forever and permanently scar a reputation.  This proposal could unfairly cause great harm to a physician’s professional reputation without any reasonable opportunity to defend themselves.  This proposal diminishes existing due process protections, and potentially permanently and unfairly scars a physician’s professional reputation.

Publicizing complaints before any real evaluation is undertaken would be like a bad Yelp review.  It would difficult or impossible for a doctor to get their reputation back.

Thanks for taking the time to advocate for doctors, our licenses and our professional reputations.