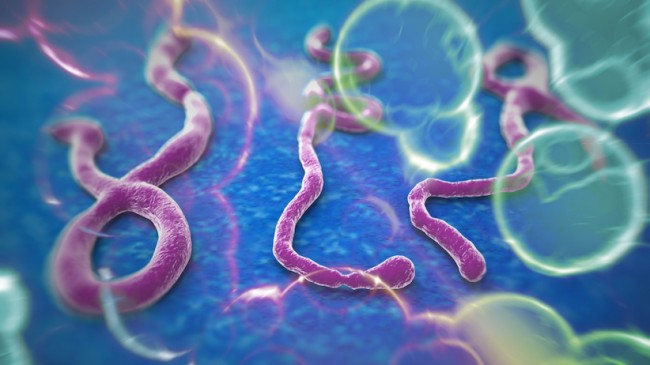 Dr. Adam C. Levine is an ER doctor from Rhode Island who recently volunteered with the International Medical Corps to fight the Ebola virus in Liberia.

The radio show The Takeaway asked him to keep a radio diary and it is a remarkable document of a doctor doing his job in an incredibly difficult situation. END_OF_DOCUMENT_TOKEN_TO_BE_REPLACED

The Changing Faces of the Doctors, Part II

In our last blog we explored the New Guard of medicine analyzed in the 2014 Survey of America’s Physicians. One of the more interesting findings of the survey is that this New Guard, which tends to be younger, female and employed, has a more positive attitude toward medicine than the old guard:

The following chart breaks down morale by group:

Yet it is the intersection of morale and clinical autonomy that deserves the most attention:

While woman and primary care doctors feel their autonomy is challenged slightly more than their male and specialist colleagues, the more surprising result is that employed doctors report their autonomy is challenged slightly less than their owner colleagues. Of course, not unlike pain scales, specialists and primary care doctors may have a different sense of what it means to be compromised.

The authors of the report comment on these findings:

“This contradicts the widely perceived notion that physicians sacrifice their clinical autonomy to become employees in exchange for security, while practice owners sacrifice security to preserve clinical autonomy. In fact, the survey suggests that many employed physicians and practice owners feel their clinical autonomy is limited, in close to equal numbers. This may in part be a result of more robust clinical analytics than existed in the past, which, by outlining treatment protocols for various medical conditions, have taken some of the subjectivity out of medicine.”

This suggests a far more complex relationship between big data, treatment protocols and doctor autonomy. The authors of the survey point to what is in fact an ongoing critique of evidence based medicine (EBM), namely that it removes the craft or art of medicine. Timmermans and Mauck summarize this particular critique in The Promises And Pitfalls Of Evidence-Based Medicine:

“By discouraging idiosyncrasies in clinical technique, standards introduce disincentives for individual innovations in care and healthy competition among practitioners. Instead of revolutionizing care, EBM therefore threatens to bring about stagnation and bland uniformity, derogatorily characterized as ‘cookbook medicine.’”

What is so interesting in the survey is the suggestion , and it is only a suggestion, that analytics and protocols may be changing how doctors understand autonomy, and that this changing sense of autonomy might be reflected in the experience of doctors and the survey. In short, perhaps the changing nature of the health care delivery system is changing both what autonomy means and the doctor experience of that autonomy being challenged.

If this is the case it might be useful to remember that Timmermans and Mauck conclude their article by calling for a democratization of standards. The questions moves from a binary sense of autonomy to a larger concern over how the standards are created:

“The construction and implementation of clinical practice guidelines tend to remain the exclusive purview of leading experts and thereby regularly fail to take into account available resources and opinions of allied professionals, support staff, and patients who will be directly affected by the guidelines.”

It is precisely that failure to utilize the best resources, such as the front line doctors who take care of our patients, that is one of the central messages of our Doctors Council White Paper. Doctors’ input and voices must be heard on patient care and quality improvements. This would improve provider satisfaction and in turn enhance patient satisfaction.

The Changing Faces of the Doctors

The results of the 2014 Survey of America’s Physicians: Practice Patterns and Perspectives was recently released by The Physicians Foundation.

Some of the key findings of the survey can be confusing unless we examine the changing demographics and employment status of doctors and ask how those demographic changes relate to doctor morale.

On the one hand doctors feel busier than ever before and they believe their autonomy is under attack. According to the survey:

“81% of physicians describe themselves as either overextended or at full capacity, up from 75%in 2012 and 76% in 2008. Only 19% say they have time to see more patients.” “69% of physicians believe that their clinical autonomy is sometimes or often limited and their decisions compromised.”

On the other hand, the overall morale, by some measures, has improved from 2012:

“44% of physicians describe their morale and their feelings about the current state of the medical profession as positive, an increase from 32% in 2012.”

The 2014 Survey of America’s Physicians: Practice Patterns and Perspectives introduces the idea of the New Guard of Doctors. What does this new Guard Look like?

One major change documented in the survey seems to be the transition from specialist to primary care medicine. 37% of respondents in the 2014 survey identified as primary care whereas 34.8% did in 2012. The authors of the report note the comparable positive outlook of primary care doctors might account for the overall rise in doctor morale from 2012.

The trend toward a greater percentage of female doctors continues.   33% of the respondents were woman in 2014 compared to 26% in 2012. (p. 40) Furthermore 50% of medical students are currently female (p. 41) and the percentage of women in primary care specialties tends to be greater. Women tend to have a more positive view of medicine than men and this too might have affected the overall morale rate of the survey.

“Medicine soon will be faced with a wave of physician retirements as baby boom doctors begin to exit the field. … The younger physicians who take their place are likely to have different attitudes toward medicine and the healthcare system as a whole, and, in fact, both the 2012 and 2014 surveys indicate they have a relatively more positive perspective than do older physicians.” (p. 41)

Today, more doctors are employed (salaried) doctors than ever before and it appears that this trend will not only continue but also grow.

The trend toward employment status ties closely toward medicine other trends toward primary care, woman, and younger doctors.

What is important to doctors?

But perhaps the biggest question is the extent to which the changing demographics and employment status of doctors affects the meaning of morale and job satisfaction. In short, are the major issues and concerns of the salaried doctors today the same as the self-employed doctor in the past? Does the survey, which tracked questions of morale since doctors were predominately self employed and male, correctly understand the key issues for today’s primary care women doctors?

In one of the classic questions that measures physicians’ morale, namely would you recommend medicine as a career to your children, 50% of physicians said they would in 2014 as compared to 42% in 2012 and 40% in 2008. (p. 9) But what is this question measuring? Would a self-employed male specialist in 2008 even use the same criteria in answering about morale as a primary care salaried woman physician in 2014?

In the next blog we will look deeper into the morale numbers in the survey and try to understand what today’s doctors are fighting for and how questions of morale and satisfaction are changing.

“Otherwise, the project will fail…”

It is hard to argue against the long-term goals of Electronic Medical Records (EMRs)/ Electronic Health Records (EHRs). Even a recent AMA report that is, on the whole, critical of the current state of EMRs and meaningful use makes the point that: “Effective use of EHRs is a key element in achieving the Triple Aim—improving the patient experience of care (including quality and satisfaction), improving the health of populations and reducing the per capita cost of health care. “

END_OF_DOCUMENT_TOKEN_TO_BE_REPLACED

Who is taking care of the patients around here? 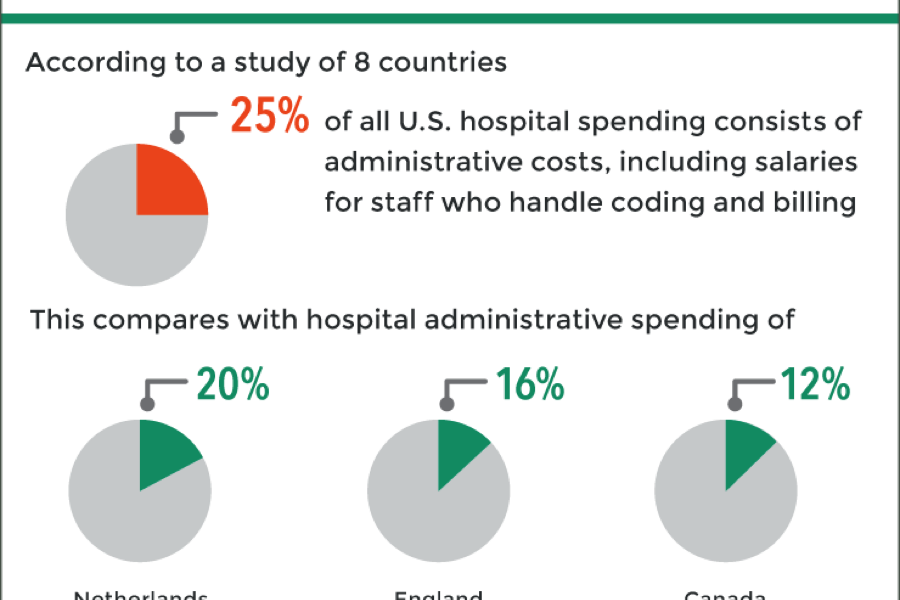 There is definitely something top heavy about the American Health care system. According to a recent article in Health Affairs by Himmelstein et al, which is summarized above in the Commonwealth Fund graphic, a quarter of all health care spending in the United States goes to administrative costs. The Health Affairs article points out that the trend is getting worse, “US hospital administrative costs rose from 23.5 percent of total hospital costs ($97.816 billion) in 2000 to 25.3 percent ($215.369 billion) in 2011. In the same period, the hospital administration share of GDP rose from 0.98 percent to 1.43 percent.” END_OF_DOCUMENT_TOKEN_TO_BE_REPLACED

It’s not only true at the VA… 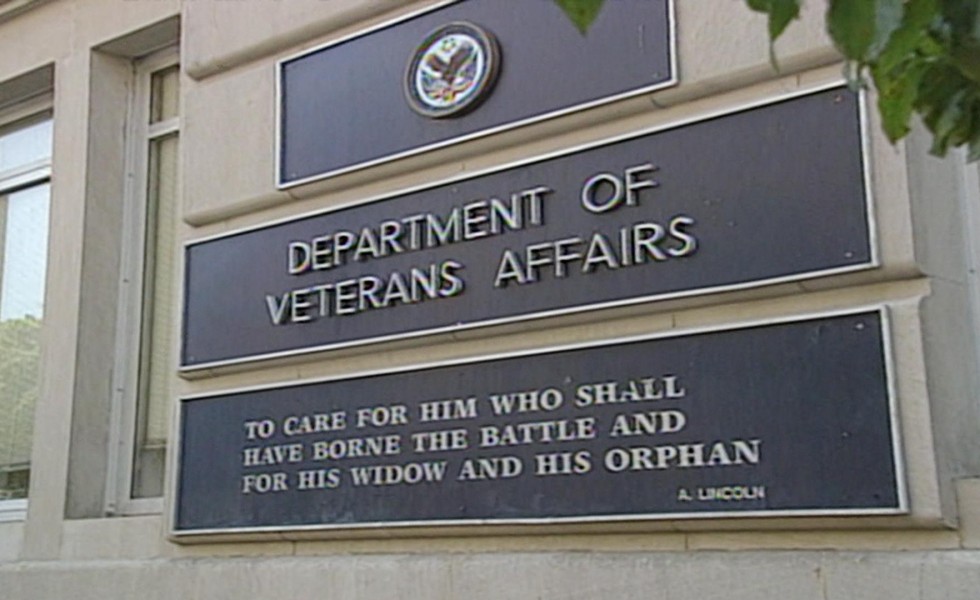 In is interesting how in moments of crisis and scandal, this time at the VA, some obvious common sense returns to the healthcare conversation. According to an article in the New York Times, Robert A. McDonald, the new secretary of Veterans Affairs, had some pretty level headed proposals for the VA health system:

END_OF_DOCUMENT_TOKEN_TO_BE_REPLACED

In a recent Wall Street Journal essay, Dr. Sanjeep Jauhar quotes a doctor who seems to sum up the Rodney Dangerfield state of the American Medical Profession,”I get too little respect from patients, physician colleagues, and administrators, despite good clinical judgment, hard work, and compassion for my patients.”

In the new era of population based metric driven health care it is easy to forget the doctor. Professional morale is low and the data suggests that this is more than a few isolated doctors. END_OF_DOCUMENT_TOKEN_TO_BE_REPLACED